All aboard as Thomas and his engine friends embark on exciting adventures with some new furry friends!

Percy learns to be gentle when meeting some small forest friends, and Thomas goes hog-wild trying to be Really Useful for Farmer Trotter.

Henry performs a sweet deed in returning Sodor's special songbird and Thomas must fulfill a tall order when he is asked to deliver the newest animal to Sodor's Wildlife Center.

The engines are busy as bees being Really Useful and helping animals big and small! 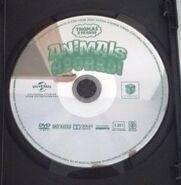 Bonus Features
Add a photo to this gallery
Retrieved from "https://my-scratchpad-wikia.fandom.com/wiki/Animals_Aboard!?oldid=191742"
Community content is available under CC-BY-SA unless otherwise noted.