Charubala is the controller of the Indian Railway.

Charubala was first seen at a shunting yard when Thomas and Nia are heading to Sodor.

While Thomas was working on the Indian Railway, he followed Charubala's orders. One day, she introduced him to the Director of a Bollywood movie that was being filmed on the railway, as he had a job for him. She was later present on the set during the filming of the movie.

When Charubala told Thomas to collect and deliver a truckload of coconuts, he became lost at the Monkey Palace. When Thomas arrived at Varkala Railway Station, Charubala was disappointed that all the coconuts were gone and she asked Thomas to go and get some more. Thomas managed to get more coconuts with the help of the monkeys and he delivered the coconuts to Charubala on time.

Later, when Thomas and Rajiv were excited and wanted to take passengers on Noor Jehan's jungle tour to see tigers, she reminded them that they still had their own jobs to get done first. Thomas later brought her with a pair of police officers to apprehend two poachers that hired Rajiv to help them find and capture a tiger, but were lured into a trap by Thomas, Rajiv, and Shankar instead. She was very impressed with Thomas and Rajiv for helping protect the tigers, before sharing a laugh when it was discovered that Shankar had disappeared in the meantime.

Charubala with the Indian Director

Charubala with some police officers

Charubala with Thomas and Rajiv

Charubala in the twenty-third series 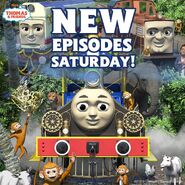 Add a photo to this gallery
Retrieved from "https://my-scratchpad-wikia.fandom.com/wiki/Charubala?oldid=74978"
Community content is available under CC-BY-SA unless otherwise noted.