Gustavo's Express Line is an electric railway line in Brazil, run by Gustavo. The line runs by a beach, over a waterfall, through a rainforest and into a tunnel. It is unknown where the line goes after this.

The line was introduced in the twenty-third series, when Gustavo advised Thomas not to follow the line. Not wanting to be bossed around, especially since he thought the big engine's mindset was identical to Gordon, Thomas took the line anyway. Due to it being an electric line, however, there were no coal and water supplies and Thomas soon ran out of fuel, but was soon helped by Gustavo. 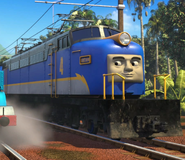 Gustavo
Add a photo to this gallery

Gustavo's Coaches
Add a photo to this gallery

The tunnel
Add a photo to this gallery
Retrieved from "https://my-scratchpad-wikia.fandom.com/wiki/Gustavo%27s_Express_Line?oldid=75018"
Community content is available under CC-BY-SA unless otherwise noted.