The Adventure Begins is a 2015 Thomas and Friends special running for approximately forty-five minutes and is an adaptation of the first two books of The Railway Series, which were previously adapted for the first series in 1984. It was made to celebrate the 70th anniversary of the franchise. The special was originally released as a Walmart exclusive in the US and in the Canada and later as an ASDA exclusive in the UK before becoming widely available in both countries. 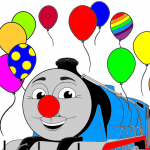